The art of creating display cases

For Bruns, the object to be presented is central to the realisation of a display case. Each display case is manufactured with the right technical specifications for the optimal preservation of the object to be displayed. Bruns has the advantage of having a glass processing hall with its own machines; this enables us to deliver you the exact glass processing and connecting elements you require.

Because Bruns has its own glass processing hall, we are able to manufacture both integral and custom display cases; think, for example, of free-standing, wall or table models. We will be happy to provide you with advice on how to optimally fulfil each and everyone of your qualitative and aesthetic wishes and requirements.

Bruns operates in both the public and private sector. We apply our expertise, for example, to the manufacturing of custom wine displays for restaurants, private collections as well as to luxury yacht building. We also realise wine display cabinets that maintain a constant temperature in order to ensure the optimal storage of valuable bottles.

Bruns has developed a display case line with its own systems, hinges and opening mechanisms. We apply our technique in different types of display cases: detachable, modular, permanent and temporary. Our display cases can be equipped with security and climate systems as well as lighting equipment as required. Here, too, the object is central.

Bruns is able to guarantee the highest achievable airtightness and required humidity, which is essential for the preservation of a collection. Our expertise allows us also to realise oxygen-free display cases by using nitrogen. Bruns tests each display case for functionality before it is installed at the project site.

We provide our display cases with all the desired equipment, such as rear walls, graphic solutions, plinths and/or object supports. By doing so, Bruns takes on the role of multidisciplinary partner, making life easier for you while meeting all your needs. 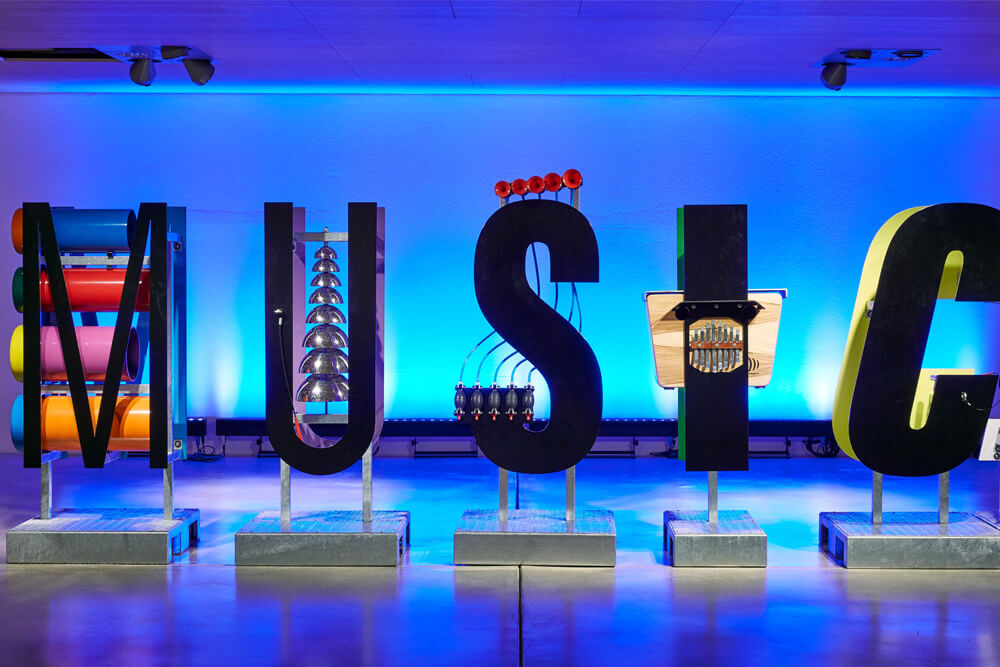 MUSIC! is an interactive traveling exhibition. The initiative of four museums: Museon (NL), Limburgs Museum (NL), LVR-LandesMuseum (DE) en Braunschweigisches Landesmuseum (DE). This exhibition arose on the occasion of the 250th year of birth of Ludwig van Beethoven. The exhibition can be visited for a certain period at each of the above partners. The first location where its installed is in the LVR-LandesMuseum in Bonn.
The result of the cooperation with all the partners is an exhibition that immerses visitors in the common music experience: around the world. Thirty interactive stations invite the visitors to listen, make and feel music. The skills for playing an instrument are not necessary. Everyone is welcome to visit the exhibition. Curiosity to new sounds and experience is just what you need.

In collaboration with the four museums, Bruns is the party that performed the exhibition in its entirety according to the design of NorthernLight. This means making the 30 stations and all exhibits in which the exhibition is provided. Together with Yipp, partner of digital communications, Bruns has taken care of the content of MUSIC! The central goal for the development of this exhibition was that all elements are easy to assemble and dismantle at the four locations.

The nice thing about this project is that it is already the third traveling exhibition for this consortium. Also at MUSIC!, Bruns is partly the owner of the exhibition and will take care of all dismantling and construction as well as maintenance. 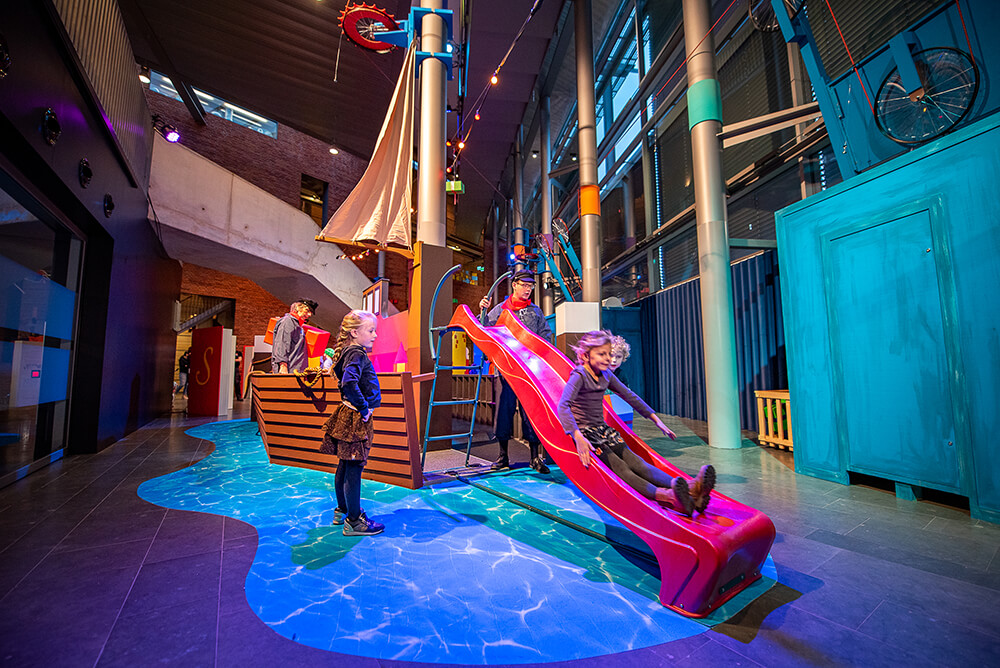 The adventure of SuperSint is a brand new exhibition dedicated to the real Dutch children’s party:
Read more >

The adventure of SuperSint is a brand new exhibition dedicated to the real Dutch children’s party: Sinterklaas. Children experience the adventures of Sint en Piet. So they clamber over roofs, operate the parcel machine and feed his horse in the stable. The children practise with language, math and train their motor and social skills in a playful way. Not just for kids is the exhibition an adventure. For the older children and adults contains the exhibition a storey layer. An enrichment in knowledge about the origin of the old legends and traditions around Sinterklaas and his role among people.

The play- and learn units in the exhibition are in line with the eponymous book “The adventure of SuperSint’, written by Maranke Rinck and illustrated by Martijn van der Linden. The book and the exhibition contribute to the development of the target group.

Bruns was completely responsible for the technical design, engineering and realization of the SuperSint exhibition. A richly covered exhibition with different elements.

The parcel machine is a big part. This picks up packages which travel a 60-meter path through the foyer and end up in a decorated chimney. Another special element is the boat in the middle of the foyer. This is a boat construction of 6-meter long with a steamboat bow with a chimney on one side and a bow sailing ship with mast and slide on the other side. Besides the parcel machine and the boat, there are climbing blocks in the form of roofs with windows and scent units. Furthermore there is an horse stable with 2 decorative horses, food and an exhibit that indicates which horse can eat what.

Beyond the foyer is a memory game consist of a wall with 12 compartments, each with an object. The correctly selected boxes remain illuminated. Opposite this game there is a game wall with a motorial game and a graphic representation of a bench with characters from the story.
There are also three open books,1.8 meters high and one big Sinterklaas book, 2.3 meters high. Besides these open books, there is a special book in a T-shape that is provided with various display cases in the entire thickness of the book.

The exhibition is dismantled and stored after Sinterklaas and rebuilt the following year. 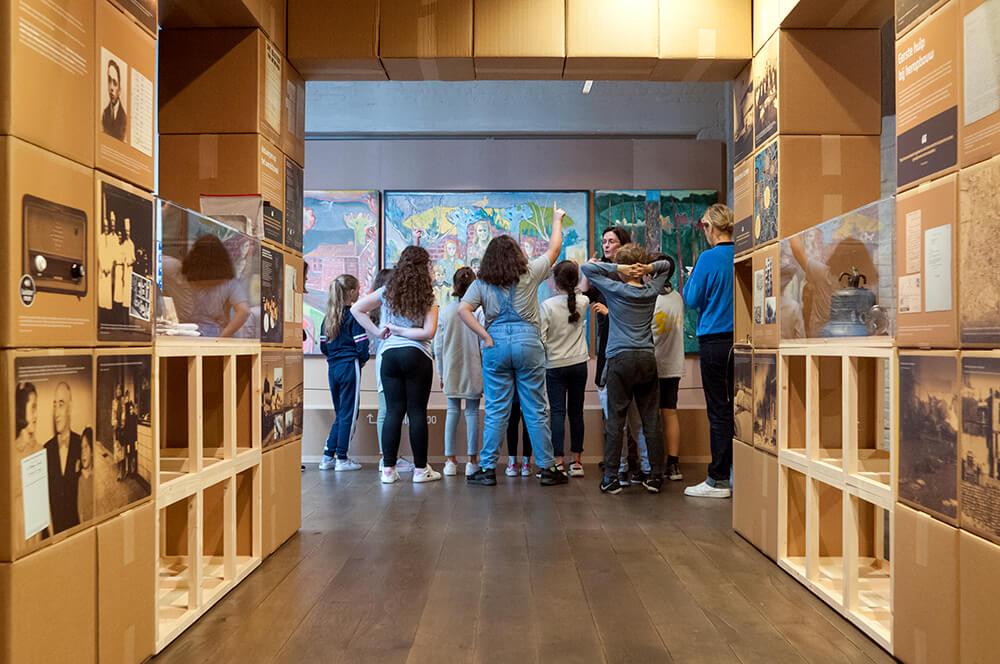 The temporary exhibition Victory & Sadness is all about the 75 years of liberation of Antwerp. A com
Read more >

The temporary exhibition Victory & Sadness is all about the 75 years of liberation of Antwerp. A commemoration to the ending of the Second World War, 75 years ago. Antwerp was liberated on 4th of September in 1944. From that moment, more than four years of occupation are finally over. The first victory day turns into nine long liberation months. Moths in which fear of bombs and destruction occurs. Hungry trough food shortage and concern about the fate of loved ones somewhere far away.
In the exhibition Victory & Sadness discovered the visitor, on the basis of authentic photo’s, film material, testimonials and war objects, how moment of victory and sadness alternate during and after the liberation. 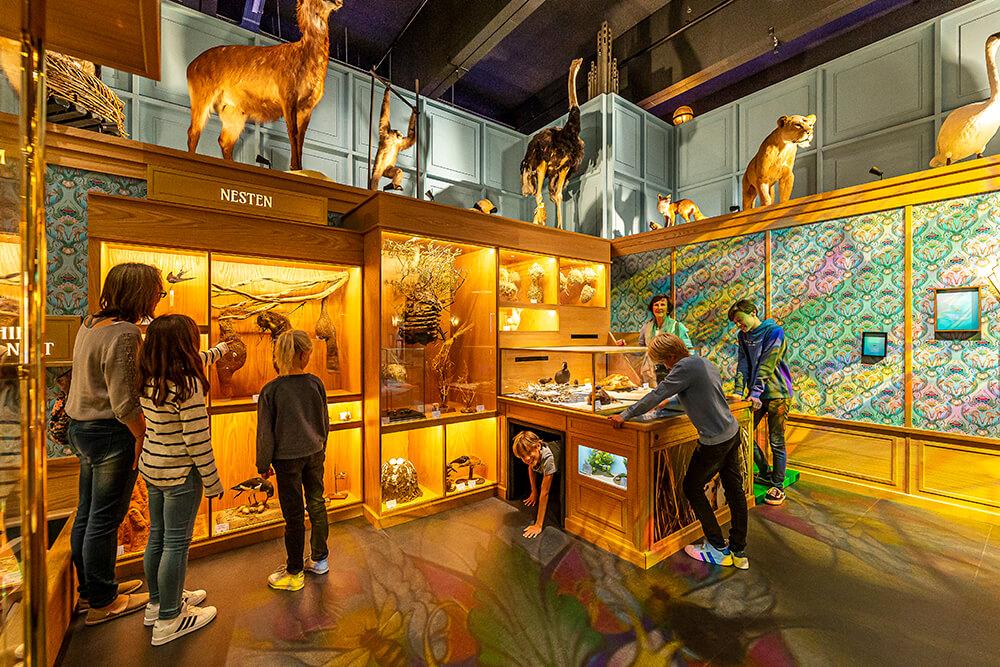 Naturalis, the national research institute in the field of biodiversity, has reopened with a brand n
Read more >

Naturalis, the national research institute in the field of biodiversity, has reopened with a brand new family museum. Young and old being submerged in the wonderful world of the nature. The museum is all about seeing, doing and experiencing. In different museum halls, the visitor discovered the early live on earth, the Netherlands in the Ice age and the primal forces of our earth. Also the visitor is introduced to the surprising lines of plants and animals, they face an African elephant and they meet the T. rex Trix. In the LiveScience hall they experience the work of an researcher and collection manager. Not because of an exhibition, but by really watching the scientist in everything they do. Anyone with a nature question is welcome at Naturalis and receives an answer from an expert.

Bruns was responsible for the development, engineering and realisation of four halls: The Earth, The Temptation, The Ice age and LiveScience. The hall The Earth is about het natural phenomenon earthquakes. The traditional Japanese theatre, part of this hall, concern an ancient Japanese myth that tells the cause of earthquakes. According to the myth is the gigantic fish Namazu the founder. Only god Kashima can immobilize the fish. Bruns made an earthquake- experience, consist of real moving dolls and a moving platform to make the story play. Besides the Japanese theatre there is also a big treasury in the hall The Earth. Here you can admire the most beautiful collection of stones in showcases of non-reflecting glass specially developed by Bruns.

The temptation is a world in the art-deco style with a lot of interactivity for young audience. This hall of more than 480m2 is divided in two worlds, namelijk The Birth and The Deed. A big birth cake in the colours pink and blue is used as symbol for new live. The hole collection beautiful young stuffed animals are being presented on this birth cake. The second part The Deed is about sex in the animal Kingdom. A subject that is presented in a colourful an humorous way.

The hall the Ice Age takes the visitor to a wild nature in an inhospitable primeval landscape. With a giant scale model, designed by Daniel Ament and realized by Bruns, a completely unrecognizable landscape is visible of the Netherlands. The visitor is brought back to the Ice Age via places viewers around the model. LiveScience is against a different type of room. Here is it not going about a story, but about exhibiting the wealth of collection items and the reality of the work as a scientist or collection manager.

In short, Naturalis is a museum consisting of very rich range of multidisciplinary exhibitions for which Bruns was fully responsible for four halls. A museum with a great success for the audience. This is evident from reaching the 100,000th visitor in six weeks.
More projects